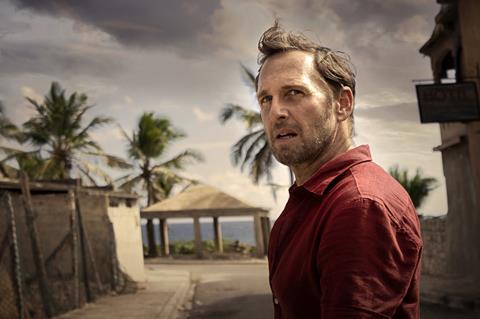 Highland Film Group has locked a raft of key pre-sales on in-demand Josh Lucas survival thriller The Black Demon and released a first-look image as talks with EFM buyers continue.

Rambo: Last Blood director Adrian Grünberg helms the project, which just wrapped in Dominican Republic and stars Lucas as an oilman on a trip to Baja, Mexico, who becomes stranded with his family on a rig where the sins of his past have put him and all he holds dear in the crosshairs of a sinister force.

Highland’s distribution arm The Avenue will release The Black Demon in the US. Rounding out the main cast are Fernanda Urrejola, whose credits include Clint Eastwood’s Cry Macho and Narcos: Mexico, and Julio Cesar Cedillo from The Harder They Fall and Narcos: Mexico.

International deals have closed with Germany’s SquareOne Entertainment, who was a key international partner early in the life of the project, as well as Signature Entertainment for the UK, Rialto Distribution/ Vertigo Releasing for Australia and New Zealand, Originals Factory for France, Italian International Film for Italy, DeAPlaneta for Spain, and Falcon Films for Middle East.

Boise Esquerra wrote the screenplay to The Black Demon, which is based on Mexican legand. Mucho Mas’ Javier Chapa and Silk Mass’ Jon Silk served as producers alongside R.U. Robot’s Petr Jákl. Sen. Cotton on Biden’s SOTU address: I hope he announces no more half-measures on...