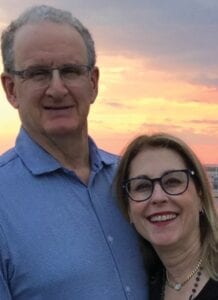 In the 40 years Susan and Rob Lang have lived in this Jewish community, they have seen many friends and community members come and go. Despite this, they are committed to staying put and helping our Jewish agencies thrive. One of the ways they have kept that commitment is by promising gifts to the LIFE & LEGACY program.

“All of the agencies in the LIFE & LEGACY program are worthy of support. We chose to support the ones closest to our hearts, and we encourage others to do the same,” said Susan. For the Langs, these organizations include Beron Jewish Older Adult Services (JOAS), Jewish Family Service (JFS), Sara and Sam Schoffer Holocaust Resource Center of Stockton University, and Shirat Hayam.

While they do not use the services of JFS and JOAS, they have included these organizations in their legacy gifts because they believe, as Jewish individuals, they share the responsibility of Tikun Olam, repairing our world. They have included Holocaust Resource Center because in an increasingly polarized world with rising anti-Semitism, the Center highlights lessons from history that can impact modern society. For Susan and Rob, Shirat Hayam has been a “home away from home,” and they want to ensure that the congregation they love will serve as a home to future generations.

They have included JFS because they have a long history with the agency. Rob is a former president, and Susan has delivered Kosher Meals on Wheels to homebound seniors. They believe JFS is an organization that improves lives, and they are proud to support their many programs, including counseling, nutrition, and human services to those in need. “They are a lifeline in times of crisis. They were superheroes during Superstorm Sandy and are now working diligently to help those affected by COVID-19,” Susan explained.

Shortly after moving to the community, Susan and Rob were invited to participate in a Jewish Federation Young Leadership program, where they learned about each of the community agencies. At the end of the program, Susan was asked to join the JOAS board, ultimately serving as president. “JOAS has been a lifeline of social, medical, and nutritional support to a fragile population, and has enriched countless lives,” she said.

The Langs have been members of Shirat Hayam, and its predecessor, Congregation Beth Judah, for 40 years. Several years after moving to the area, the synagogue reached out to them following the death of Susan’s father. They began attending services every Friday evening so Susan could say Kaddish. By the end of the year, they had developed a group of new friends, all of whom are like family and very dear to them to this day. Their children were raised in the synagogue and also consider it their home. Susan and Rob have each served on the synagogue board, with Rob serving as its president, and where he continues to volunteer.

For Susan and Bob, it is crucial that Sara and Sam Schoffer Holocaust Resource Center remains strong and viable, that it continues to spread its message of Holocaust and genocide education, and that it fights hate and prejudice. Susan has been involved with the Center, a joint project of Stockton University and Jewish Federation of Atlantic & Cape May Counties, for more than 30 years, beginning with training to take the testimonies of local Holocaust survivors. She has served as chair of the Center’s executive committee for the last several years.

Although some wonderful new and young leaders have emerged in the community in recent years, Susan and Rob believe this budding Jewish population includes far fewer individuals than will be needed to sustain our agencies in their current form. In their eyes, in coming years, this may potentially lead to a large gap between funds required and funds donated to local agencies. They consider their LIFE & LEGACY a means to bridge the gap and a help to sustain the community they love so much, well into the future.

The more gifts promised to LIFE & LEGACY, the better sustained and strengthened will be local agencies, synagogues, and all who live in One Jewish Community. If you or someone you know is interested in learning more about the LIFE & LEGACY program, please contact Samantha Hammond or Kirk Wisemayer at Jewish Federation/Foundation at (609) 822-4404.