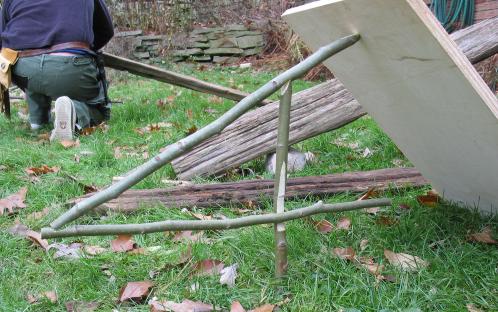 Survival snares and traps will help feed the family during a long-term disaster or simply if you’re looking to supplement the menu choices when living off the grid or on a rural homestead.

Traps and snares hang, trap, crush or choke the prey. The best type of snare or trap to construct is a simple one. Devices made of inexpensive material with a simple design allow you to locate the traps and snares in multiple locations, increasing the likelihood of going home with some meat.

The figure four dead fall animal trap got its name from the shape of the pieces used to create the hunting device and the rapid fall of the object used to kill the prey. A piece of board or wide branch is often used at the top of the trap, with a heavy stone balanced near the top. Branches or other small piece of pole-like wood or metal prop up the top of the trap. This type of trap can be made in any number of sizes.

A weight of some type supplies the downward pressure on the end of the stick support. A diagonal stick that rests and pivots on a vertical stick keeps the trap from slipping or tipping over. The diagonal stick must be held into place by affixing the pieces together with a piece of string or rope that will break away when the trap is tripped by an animal.

A fixed loop snare is typically made from either braided steel cable or wire. Wire is usually strong enough to trap small game-like rabbits, squirrels, raccoons or a fox. This type of snare is usually a one-time-use hunting aid. The wire on a fixed snare is often kinked or bent by an animal as it struggles to break free. Many trappers consider the fixed snare the quickest type of snare to make and set.

To make a fixed snare use a piece of branch or a twig found on the ground; the twig should be considered breakable. Wind one end of the wire around the piece of branch about three times and twist the wire or steel cable as you close the end. Once you break the twig, you will have an “eye” in the wire, just like used when sewing, but on a larger scale.

Make a loop out of the other end of the wire and thread it through the eye. Put the fixed snare along small game trails or over burrows. You can attach the snare to a spring pole to garner an even more secure snare line. Copper or brass-colored wire blends in with the wooded environment far more than silver wire. The less likely animals are to discover your fixed snare, the more likely you will find your next meal waiting when you return to check the hunting device.

Perhaps the simplest snare to make is of the noose variety. The rope, chain, wire or heavy string noose should be placed over an animal den or trail frequented by wildlife. So placing the simple snare near a path to a watering hole would be an ideal location. Make the noose just large enough for the head of the most likely prey to pass through. As the creature attempts to move through the obstacle, the noose snare should tighten around its neck. Although a simple snare may not actually kill the prey, it will keep it in place until your return. Check the traps frequently for the sake of both bagging the meat and for the sake of humane treatment of the animal. Baiting the noose will likely increase the curiosity of animals in the area.

A dead fall pit is an excellent way to trap large, and potentially deadly animals. The digging required to make a deep hole in the ground will require both time and energy. So this is not a project to undertake and expect to score meat for dinner the same day. Making sure that everyone knows where the pit is located or marking it with a warning flag will help keep those you care about safe.

As with the simple snare and the dead fall trap, look for a quality game trail before grabbing a shovel to begin making the dead fall pit. Dig the pit deep enough that large game in the area will not be able to escape. Encountering a wounded and angry bear that managed to crawl out of the pit will quickly change you from the hunter to the hunted.

Once the trap has been dug to the desired depth, “plant” sharpened sticks, branches, or metal poles into the ground. Cover as much of the open area as possible; the prey may not fall dead-center and could be alive and feisty when you arrive to haul it out. Once the dead fall pit construction is complete, tie together long but not thick branches to cover the pits. Placing leaves and grass over the pit will further hide the trap from the animal’s view. 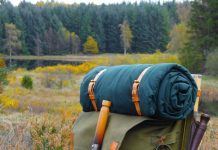 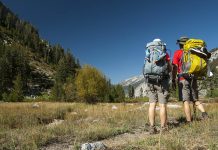 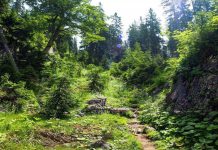